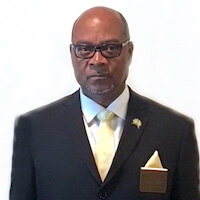 Shelby B. Turner, II is a graduate of East St. Louis Lincoln High School, Southern Illinois University, Advanced Non-Commissioned Officer Academy and the National Academy of Mortuary Science. Shelby, II is a retired United States Army Veteran where he served for 27 years. Shelby, II began working with Dafford Funeral Home, Inc. in 2017. He is a member of McLean Chapel F.W.B. Church in Bunnlevel, NC, where he is a Bass Guitarist in the Music Ministry. Shelby, II was married to the late Eldress Kiki C. Turner and they have two daughters; Shelondra and Micala, one son; Shelby, III and one goddaughter, Miranda. He also has two granddaughters; Mikayla and Aspen. Shelby, II enjoys flying fixed-wing aircrafts, radio-controlled aircrafts, electric trains and fishing.